I Wanted To Love Black Panther

My views on Black Panther. Perhaps I’m one of the rare breeds who did not see the movie, at the theatre that is. I don’t like crowds. But I did buy the digital movie release of it with the bonus content. First I will say I will always be proud of the Black Director, Black Producer and the Black Cast. Art, Television, Film, Theatre and Books have always been my first love. This is what I liked about the film. Beautiful Black People on screen from all over the globe. The love T’Challa has for his father, family and country. Enchanting footage of T’Challa communicating with his deceased father. The portrayal of highly intelligent Black people who utilizing science, technology, engineering and math to create a Utopian world. Intriguing costumes by Ruth Carter. Interesting characters Okoye,W’Kabi, and M’Baku. Danai Gurira is definitely a strong actor. Her role of the head Dora Milaje is befitting. Daniel Kaluuya character W’kabi is an interesting and believable love interest of Okoye. Winston Duke breathed life into M’Baku, the king of the Jabari tribe. And of course last but not least a great soundtrack. 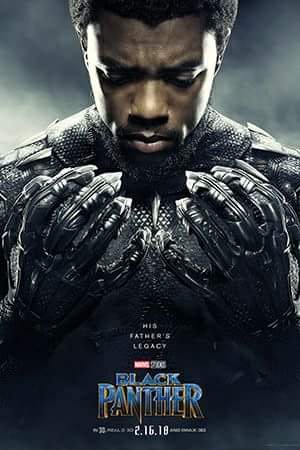 Although I wanted to really Love Black Panther, it was a bit boring and just okay. In my opinion there was no stellar acting and great moment in the film. I actually fell asleep on it a few times before I actually was able to watch the whole movie. T’Challa and Nakia had no chemistry exhibited on screen despite the scenes of T’Challa gazing at Nakia adoringly enamoured. It doesn’t work. It falls flat and stoic. Latitia Wright’s portrayal of Shuri is full of youthful exuberance as T’Challa’s younger sister, but the jokes were not funny and quite mediocre at best. T’Challa came across as a bit wooden, stiff. I’ve seen interviews where Chadwick Boseman explains the way he portrayed T’Challa based upon T’Challa’s family background and how T’Challa would carry and conduct himself based on these things. I’ll say I agree with his sentiment’s. Boseman was chosen for the part and he brought to it what he thought was best. I’ve seen several of his other movies and the man definitely can act. I’ve also seen comments about Kilmonger portrayed by Michael B. Jordan being the best hero/villian compared to T’Challa. After seeing the movie I can’t say I agree with this as I found it to be a bit boring and just ok. I’ve also seen a few Michael B. Jordan interviews indicating what he did to prepare for the role of Kilmonger. Michael B Jordan was given the role of Kilmonger and portrayed him as he saw fit as an professional actor. A movie has so much that goes into constructing it before, during and after it’s made. In this regard Black Panther is a Winner with stellar backing, support, and marketing. They’re a box office success world wide and I’m happy for them.

This is a text widget. The Text Widget allows you to add text or HTML to your sidebar. You can use a text widget to display text, links, images, HTML, or a combination of these. Edit them in the Widget section of the Customizer.